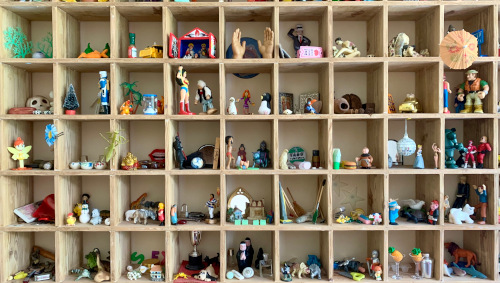 What is Sandtray, how does it work?

Sandtray consists of a container with some sand and a selection of little objects used as a therapeutic process.  Sandtray is also a dynamic and creative tool to explore a block or a question, or to help discover a new direction.

During a session a question, feeling or issue is framed for exploration. The client is invited to choose from an extensive collection of miniature toys and objects. Using a shallow tray with sand, they create a small world in any configuration that feels right.  Allowing and trusting the subconscious is part of this process. This may only take a few minutes. Then the client examines and describes the tableau. Lilliana will make observations and ask questions but generally avoids interpretation of the sand-world.

“Often the hands will solve a mystery that the intellect
has struggled with in vain.”
C.G. Jung

Everyone is encouraged to play with the sand exactly as they wish.  One might create a bird’s eye landscape, others make worlds with objects and figures. Some create dramatic play that tells a story. There is no right or wrong – its play.

Why sand tray is helpful

As young children we learn to resolve developmental issues and work through conflicts using play.  Physical play is vital to our development; toys and games provide engagement with others, and a way of being with one’s self.  Acting out characters and situations are key to early self-expression and self-reflection, and messing with sand and water provide a tactile, kinesthetic satisfaction.

As we grow older and we learn to communicate our thoughts and feelings, and to verbally resolve our differences. Effective as it may be, talking can also keep us into our heads, whereas the sandtray can help to reconnect us with our imaginative, playful selves.

Sandtray can provide another perspective on the familiar or suggest new potential. There is no mystery to the process. It simply allows us to tap into our instinctual, intuitive self – a great adjunct to cognitive thinking. Conscious and unconscious aspects of the psyche interact during play, and the meaning emerges as the client experiences and shares it. The outcome is often a feeling of rightness for the client; a situation may be revealed, now obvious, or a resolution occurs on an entirely symbolic level.

Sandtray is good for accessing unconscious drivers, and for exploring options. Originally designed for working with children, this technique has been found effective with pretty much everyone; individuals, couples and small groups. It can form a creative part of brainstorming or problem solving.

Thank you! Please check your email and confirm the newsletter subscription.

I think you are a very experienced and versatile facilitator of groups – you bring a wealth of ideas and skill to help us shift our thinking and make changes; I appreciated your candor and willingness to engage with us all in a very authentic, sensitive and robust way – encouraging and supporting us as we tried to find out way forward.

Lilliana's workshop was absolutely fascinating. She took us through a new and very interesting process of self-discovery in an expertly and at the same time extremely warm and caring way.

The work went a lot deeper than I expected. Being part of Lilliana’s group helped me to reflect and face issues I have not found the time and place to deal with before.

Thank you so much for such a great workshop – we really, really enjoyed spending the afternoon together chatting about our relationship – it came at a really good time for us & refreshed us both. It was a great way to understand and appreciate each other too. We’ve taken a lot away from it.

Lilliana's workshop was fascinating. She took us through a new and very interesting process of self-discovery in an expertly and at the same time extremely warm and caring way. Lilliana is a great listener and a very skillful coach whom I can wholeheartedly recommend because of her outstanding integrity.

Everyone can learn more about love

10 Things You Need to Know about Love

Sign up for your free copy, and to join Lilliana’s email list.
Your details are valued and never shared.

Thank you! Please check your email and confirm the newsletter subscription.You will then be able to download your free version of: "10 Things You Need to Know about Love"